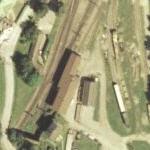 By kjfitz @ 2009-12-18 14:11:43
@ 47.63844221, 15.83077469
Gloggnitz, Austria (AT)
The Semmering railway, Austria, which starts at Gloggnitz and leads over the Semmering to Mürzzuschlag was the first mountain railway in Europe built with a standard gauge track. It is commonly referred to as the world's first true mountain railway, given the very difficult terrain and the considerable altitude difference that was mastered during its construction. It is still fully functional as a part of the former Austrian Southern Railway which is now part of the Austrian Federal Railways.

In 1998 the Semmering railway was added to the list of the UNESCO World Heritage sites.
Links: en.wikipedia.org
554 views