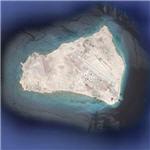 The island is situated 76 km from Bandar-e Lengeh and 50 km east of Abu Musa island. The island is one of six in the Abu Musâ Island Group (and is part of Hormozgan province). It covers an area of 17.3 km². The highest point on the island is 33m above sea level. Like the other islands in the Persian Gulf it enjoys a warm and humid climate.

Sirri Island was the location of an oil platform that was destroyed by the naval forces of the United States during Operation Praying Mantis on April 18, 1988.
Links: en.wikipedia.org
727 views