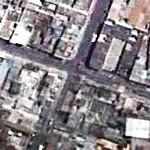 The sinkhole occured at the intersection of 11 Avenida A and 6A Calle in Zona 2.

A previous huge sinkhole that rivals this one in depth hit Guatemala city in February 2007.
Links: www.theguardian.com
6,905 views