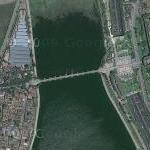 By kjfitz @ 2010-04-15 20:05:25
@ 39.849061, 116.212735
Beijing, China (CN)
The Marco Polo Bridge Incident was a battle between the Republic of China's National Revolutionary Army and the Imperial Japanese Army, often used as the marker for the start of the Second Sino-Japanese War (1937–1945). The eleven-arch granite bridge, Lugouqiao, is an architecturally significant structure, restored by the Kangxi Emperor (1662–1722). Often signifying the opening of Japan's comprehensive invasion of mainland China, both this 7 July and 18 September (Mukden Incident) are still remembered as days of national humiliation by some Chinese.
Links: en.wikipedia.org, en.wikipedia.org
940 views