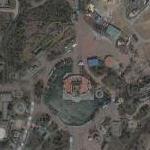 In 2007, the park is shown by international media to have made extensive, likely unauthorized, use of Disney characters and imagery, as well as incorporating other famous Japanese and American cartoon characters, such as Doraemon, Hello Kitty, Shrek and Bugs Bunny.

Park officials denied any wrongdoing. When asked by a reporter if the characters are related to Disney, the theme park's general manager Liu Jingwang (刘景旺) said that their characters are based on Grimm's Fairy Tales. In another question, Liu insisted the Mickey Mouse-like character wasn't actually a mouse, but a "big-eared cat."