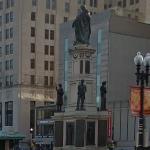 By kkeps @ 2008-10-05 12:21:34
@ 41.824249, -71.412617
Providence, Rhode Island (RI), US
Dedicated in 1871, the Soldiers and Sailors Monument was dedicated to the Rhode Island citizens who gave their life in service of the Union during the Civil War. Located in Kennedy Plaza (formerly known as Exchange Place), the monument was architected by Alfred Stone with Sculptures by Randolf Rogers.
The large text on the monument reads:

Erected by the people of Rhode Island to the memory of the brave men who died that their country might live.
Links: www.waymarking.com
1,039 views