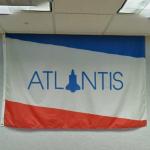 By kjfitz @ 2013-02-24 21:06:54
@ 28.585013, -80.648817
Cape Canaveral, Florida (FL), US
The space shuttles have their own flags. They traditionally accompany the OV (orbital vehicle) into the VAB, then onto the launch pad. There are several hanging in the restricted areas of Cape Canaveral; the VAB, the personnel training centers and headquarters buildings among others. A flag of the particular orbiter to be launched is raised while that particular ship in on the pad prior to launch.
Links: flagspot.net
384 views