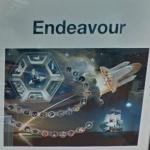 By kjfitz @ 2013-02-24 20:50:51
@ 28.585165, -80.648835
Cape Canaveral, Florida (FL), US
Space Shuttle Endeavour (Orbiter Vehicle Designation: OV-105) is one of the retired orbiters of the Space Shuttle program of NASA, the space agency of the United States. Endeavour was the fifth and final spaceworthy NASA space shuttle to be built, and first flew in May 1992 on mission STS-49 and its last mission STS-134 was in May 2011. The STS-134 mission was originally planned as the final mission of the Space Shuttle program, but with authorization of the STS-135 mission, Atlantis became the last Space Shuttle to fly.

The United States Congress authorized the construction of Endeavour in 1987 to replace Challenger, which was lost in the STS-51-L launch accident in 1986. Structural spares built during the construction of Discovery and Atlantis, two of the previous shuttles, were used in its assembly. NASA chose to build Endeavour from spares rather than refitting Enterprise or accepting a Rockwell International proposal to build two shuttles for the price of one of the original shuttles, on cost grounds.
Links: en.wikipedia.org
498 views