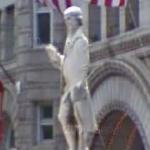 By Matheus_ @ 2011-11-11 06:50:48
@ 38.894728, -77.028058
Washington, Washington, DC (DC), US
Dr. Benjamin Franklin (January 17, 1706 [O.S. January 6, 1705 – April 17, 1790) was one of the Founding Fathers of the United States. A noted polymath, Franklin was a leading author, printer, political theorist, politician, postmaster, scientist, musician, inventor, satirist, civic activist, statesman, and diplomat. As a scientist, he was a major figure in the American Enlightenment and the history of physics for his discoveries and theories regarding electricity. He invented the lightning rod, bifocals, the Franklin stove, a carriage odometer, and the glass 'armonica'. He formed both the first public lending library in America and the first fire department in Pennsylvania.
Links: en.wikipedia.org
359 views