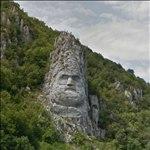 By Cornel @ 2013-04-24 20:30:28
@ 44.640239, 22.294004
Dubova, Romania (RO)
The Statue of Dacian king Decebalus is a 40-m high statue that is the tallest rock sculpture in Europe. It is located on the Danube's rocky bank, near the city of Orşova, Romania. It was commissioned by Romanian businessman and historian Iosif Constantin Drăgan and it took 10 years, from 1994 to 2004, for twelve sculptors to finish it. The final cost was over one million dollars. Under the face of Decebalus there is a Latin inscription which reads "DECEBALUS REX—DRAGAN FECIT" ("King Decebal—Made by Drăgan").

On the Serbian side facing Romania, there is an ancient memorial plaque (Tabula Traiana) commemorating the victories of the Roman Empire over the Dacian kingdom in 105.
Links: en.wikipedia.org
648 views