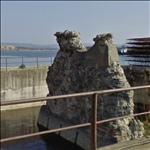 The bridge was constructed in 105 AD by the Greek architect Apollodorus of Damascus for the deployment of Roman troops in the war against Dacia.
Links: en.wikipedia.org
443 views