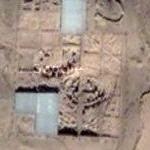 By kjfitz @ 2009-05-15 14:20:46
@ 37.223251, 38.922479
Urfa, Turkey (TR)
In southern Turkey, just north of the border with Syria, are three megalithic stone circles several thousand years older than the “first” stone circle built at Stonehenge. Strangely, these ancient stone circles were built by a hunter-gatherer society. It had previously been believed that the workforce required to construct a megalithic stone circle couldn’t be organized until human society reached the village stage of development. The three stone circles at Göbekli Tepe were deliberately buried for reasons unknown. Some people believe that Göbekli Tepe and the surrounding region were the historical basis behind the biblical Garden of Eden.

Göbekli Tepe (Turkish for "Hill with a Navel") is a hilltop sanctuary built on the highest point of an elongated mountain ridge about 15 km northeast of the town of Şanlıurfa (Urfa) in southeastern Turkey. The site, currently undergoing excavation by German and Turkish archaeologists, was erected by hunter-gatherers in the 10th millennium BC (ca 11,500 years ago), before the advent of sedentism. Together with the site of Nevalı Çori, it has revolutionised understanding of the Eurasian Neolithic.
Links: en.wikipedia.org
7,906 views