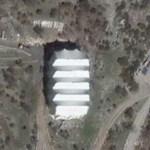 The temple is unusual in that it has examples of all three of the classical orders used in ancient Greek architecture: Doric, Ionic, and Corinthian. Doric columns form the peristyle while Ionic columns support the porch and Corinthian columns feature in the interior. The Corinthian capital is the earliest example of the order found to date. It was relatively sparsely decorated on the exterior. Inside, however, there was a continuous Ionic frieze showing Greeks in battle with Amazons and the Lapiths engaged in battle with Centaurs.

The temple of Apollo is presently covered in white tent with five rows in order to protect the ruins from the elements. Conservation work is currently being carried out under the supervision of the Committee of the Epicurean Apollo, which is based in Athens.
Links: en.wikipedia.org
980 views