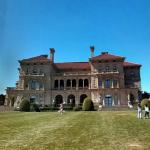 By kjfitz @ 2013-12-28 10:32:13
@ 41.469447, -71.297449
Newport, Rhode Island (RI), US
The Breakers is a Vanderbilt mansion located on Ochre Point Avenue, Newport, Rhode Island, United States on the Atlantic Ocean. It is a National Historic Landmark, a contributing property to the Bellevue Avenue Historic District, and is owned and operated by the Preservation Society of Newport County.

The Breakers was built as the Newport summer home of Cornelius Vanderbilt II, a member of the wealthy United States Vanderbilt family. It is built in a style often described as Goût Rothschild. Designed by renowned architect Richard Morris Hunt and with interior decoration by Jules Allard and Sons and Ogden Codman, Jr., the 70-room mansion has approximately 65,000 sq ft (6,000 m) of living space. The home was constructed between 1893 and 1895.
Links: en.wikipedia.org, virtualglobetrotting.com
1,085 views