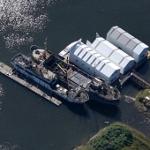 How's that "War On Drugs" working?

In 2013, the boat sank in the Hylebos waterway while awaiting scrapping.