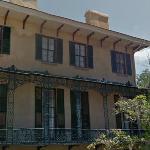 By kkeps @ 2008-11-12 04:21:30
@ 32.072846, -81.092655
Savannah, Georgia (GA), US
"Andrew Low and his wife, Sarah Hunter Low, began this house in 1847 with the help of architect John S. Norris. Their plan to live here with their three children was wrecked by the death of four-year-old Andrew, then Sarah Low herself died a few months later. After years of loneliness, Andrew was married to Mary Couper Stiles, who bore him four daughters and one son, William Mackay Low. William was called "Billow" by Juliette Magill "Daisy" Gordon, to whom he was married at Christ Church in 1886. They lived in and traveled from this imposing stucco-over-brick mansion. The marriage of Daisy and Billow was unhappy, childless, and soon they parted. Daisy Low had daughters aplenty, though, when she founded the Girl Scouts of the United States of America in 1912. The Andrew Low House was visited by William Makepeace Thackery and General Robert Edward Lee."
Links: www.waymarking.com
645 views