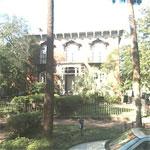 For a period in the twentieth century, the building was used as the Savannah Shriners Alee Temple. It then lay vacant for a decade until in 1969 when Jim Williams, one of Savannah’s earliest and most dedicated private restorationists, bought the house and restored it.

Before Hansford's death, as retold in Midnight in the Garden of Good and Evil, the house had already been the scene of two deaths. In 1913 a previous owner tripped over the second floor banister, fractured his hip, and suffered a concussion, dying three days later. In 1964, a boy chasing pigeons on the roof fell over the edge and impaled himself on the iron fence below.
Links: en.wikipedia.org
1,172 views