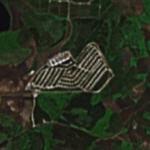 By kjfitz @ 2006-06-17 10:35:54
@ 31.751817, 34.863739
Mazkeret Batya, Israel (IL)
Tirosh, located off Route 38, is reportedly one of two Israeli nuclear weapons storage facilities. It is speculated that that Tirosh is the strategic weapons storage site, while Eilabun is the tactical weapons storage site. It is reported that the facility consists of a network of roads linking approximately 70 bunkers, each spaced about 25 yards apart. Other reports suggest that nuclear weapons are stored at the five large bunkers at this site. The facility is surrounded by a perimeter road and security fences. The facility is close to both the Tel Nof Air Base and the Sedot Mikha missile garrison.
Links: www.globalsecurity.org
2,729 views