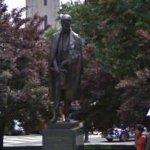 By WacoKidd110 @ 2011-11-15 19:15:30
@ 38.911418, -77.048469
Washington, Washington, DC (DC), US
Tomáš Garrigue Masaryk, sometimes called Thomas Masaryk in English, (7 March 1850 – 14 September 1937) was an Austro-Hungarian and Czechoslovak politician, sociologist and philosopher, who as an eager advocate of Czechoslovak independence during World War I became the founder and first President of Czechoslovakia, also was Moravian patriot. He originally wished to reform the Habsburg monarchy into a democratic federal state, but during the First World War he began to favour the abolition of the monarchy and, with the help of the Allied Powers, eventually succeeded.
Links: en.wikipedia.org
538 views