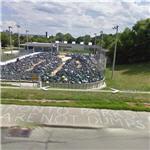 By kjfitz @ 2009-10-08 08:26:53
@ 43.66579, -79.422436
Toronto, Canada (CA)
At 12:15am on 21 June 2009, inside and outside workers, including garbage collectors, went on strike after negotiations between the Canadian Union of Public Employees and the city failed to produce an agreement. It was later announced that the park would be used as a temporary dumpsite for refuse. The decision to use the park to store garbage prompted protests from area residents. On 2 July, some residents filed a complaint with the Ministry of the Environment about the dumpsite.
Links: torontosun.com
700 views