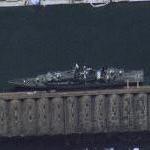 The Type 22 Broadsword class frigates are a class of warships built for the Royal Navy. Fourteen of the class have been built, however only four, all Batch 3 ships, remain in service with the Royal Navy.

The Type 22 was designed to be a specialist anti-submarine warfare vessel as part of the Royal Navy's contribution to NATO. Since then they have evolved into a general purpose frigate with weapons for use against other surface ships, aircraft and submarines. They were built in three batches giving rise to three sub-classes, the first Broadsword of four ships, the second Boxer of six ships and the third and final, Cornwall of four ships.

The four Broadswords (which included two Falklands War veterans) were sold to Brazil in the mid 1990s. Romania has acquired and modernized two of the Batch 2 ships, while a third was purchased by Chile.
Links: www.globalsecurity.org
707 views