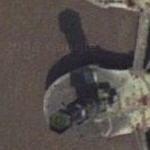 Known locally as the Victoria Tower it is made of granite and has six sides, each of them bearing a clock face.

The famed architectural critic Sir Nickolaus Pevsner responded to the tower by claiming: "It is all ham, but it tells of the commercial pride of the decades."
Links: www.liverpoolmonuments.co.uk
553 views