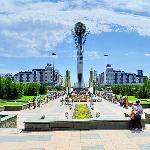 This photo sphere was made between May and July 2010 (and not as designated August 2013) when the United Buddy Bears visited the capital of Kazakhstan, Nur-Sultan.
Links: commons.wikimedia.org, en.wikipedia.org
380 views