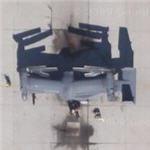 By kjfitz @ 2009-09-04 11:15:42
@ 35.048649, -106.595992
Albuquerque, New Mexico (NM), US
The Bell-Boeing V-22 Osprey is a multi-mission, military, tiltrotor aircraft with both a vertical takeoff and landing (VTOL) and short takeoff and landing (STOL) capability. It is designed to perform missions like a conventional helicopter with the long-range, high-speed cruise performance of a turboprop aircraft. The V-22 was developed and is manufactured jointly by Bell Helicopter, and Boeing Rotorcraft Systems. It is operated by the United States Marine Corps and Air Force.
Links: en.wikipedia.org
625 views