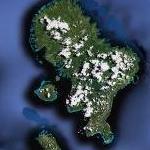 The sea around the island was the site of the Naval Battle of Vella Lavella in World War II.