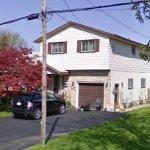 By milwhcky @ 2010-08-03 17:41:44
@ 43.181184, -80.27519
Brantford, Canada (CA)
This is where the NHL legend grew up. When he was four years old, Wayne's father Walter built a backyard ice rink equipped with flood lights for Wayne, his three brothers, one sister, and their friends from the neighborhood to enjoy. Wayne spent many nights learning the basics of playing hockey from his father on their rink.

Wayne's younger brothers Keith and Brent would also grow up to play professional hockey, but they did not enjoy nearly as much success as their older brother.
Links: en.wikipedia.org
12,126 views