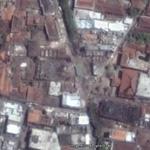 The attack involved the detonation of three bombs: a backpack-mounted device carried by a suicide bomber; a large car bomb, both of which were detonated in or near popular nightclubs in Kuta; and a third much smaller device detonated outside the United States consulate in Denpasar, causing only minor damage.

Various members of Jemaah Islamiyah, a violent Islamist group, were convicted in relation to the bombings, including three individuals who were sentenced to death. Abu Bakar Bashir, the alleged spiritual leader of Jemaah Islamiyah, was found guilty of conspiracy, and sentenced to two and a half years imprisonment. Riduan Isamuddin, generally known as Hambali and the suspected former operational leader of Jemaah Islamiyah, is in U.S. custody in an undisclosed location, and has not been charged in relation to the bombing or any other crime.
Links: en.wikipedia.org
2,198 views