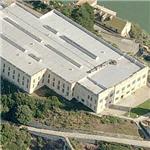 By kjfitz @ 2007-11-23 10:13:37
@ 37.827022, -122.422717
San Francisco, California (CA), US
The Great Depression and Prohibition contributed to a severe crime increase during the late 20's and 30's, which produced a new era of organized crime. The nation witnessed a sharp rise in horrific violence, which was brought on by the combined forces of prohibition and great need. The American people watched in fear as influential gangsters and public enemies gained heavy influence in metropolitan areas and the authorities that were responsible for their safe-keeping. Law enforcement agencies were not equipped to deal with the situation, and would frequently be beaten by better armed gangs in a shoot-out.

Alcatraz was perceived as the best solution that the government could find in response to these problems. It could serve the dual purpose of placing public enemies away from the general population, and also to serve as a warning to this new and ruthless brand of criminals that were ruling the streets of the country. Sanford Bates, the head of the Federal Prisons, and Attorney General Homer Cummings led the project, and they were responsible for the finely detailed design concepts. One of the top security experts of the day, Robert Burge, was asked to help design an escape proof prison. The original cell block, built in 1909, would undergo an extensive process of upgrades and renovations.

In April of 1934, the work gave the military prison a new face and a new identity to the prison. The soft squared bars were replaced with very modern tool-proof iron bars. Electricity was routed into each cell, and all of the utility tunnels were cemented to completely remove the possibility that a prisoner could enter or hide in them for escape purposes. Tool-proof iron window coverings would protect all the areas that could be accessed by inmates. Special gun galleries surrounded the cell block perimeters, allowing guards to carry weapons while being protected behind iron barriers. These secure galleries, which were elevated and out of reach of the prisoners, were to be the control center for all keys, and would allow the guards the ability to keep an eye on all the inmate activities.

Special teargas canisters were permanently installed in the roof of the dining hall, and they could be activated remotely, from the gun gallery as well as from the outside observation points. Guard towers were strategically positioned around the perimeter, and new technology allowed the use of metal detectors, which were positioned outside of the dining hall and on the Prison Industries access path. The cell house contained a total of nearly 350 cells, which were very far from the perimeter wall. If an inmate managed to tunnel his way through the cell wall, they would still need to find a way to escape from the cell house itself. The inmates would only be assigned to B, C, and D blocks, since the primary prison population was not allowed to exceed 300 inmates (although the record was 302). The implementation of these new measures, combined with the natural isolating barrier created by the very cold Bay waters, meant that the prison was ready to receive the nation's most incorrigible and dangerous criminals.
Links: en.wikipedia.org
2,024 views