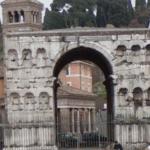 By kkeps @ 2008-10-30 17:53:37
@ 41.889086, 12.482076
Rome, Italy (IT)
It is the only four-fronted arch, with four barrel-vaults, preserved in Rome. In fact, the name "Janus" (from the Latin Ianus, which means "covered passage with four fronts") derives from this characteristic. The monument, which in the Middle Ages was transformed into a fortress by the Frangipane family, remained intact up until 1830, when the attic and top were torn down because they were erroneously believed not to belong to the original structure. Fragments of the dedicatory inscription are still preserved inside the nearby church of San Giorgio al Velabro.
Links: www.waymarking.com
483 views