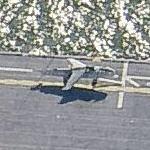 The McDonnell Douglas AV-8B Harrier II is a family of second-generation vertical/short takeoff and landing or V/STOL jet multirole aircraft of the late 20th century. British Aerospace rejoined the project in the early 1980s, and it is currently managed by Boeing/BAE Systems since the 1990s.

Developed from the earlier Hawker Siddeley Harriers, it is primarily used for light attack or multi-role tasks, typically operated from small aircraft carriers. Versions are used by several NATO countries, including the United Kingdom, Spain, Italy, and the United States.

Though it shares the designation letter number with the earlier AV-8 Harrier, the AV-8B Harrier II was extensively redesigned by McDonnell Douglas.
Links: en.wikipedia.org
11,937 views