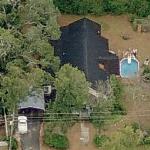 This home has been owned by Watson's parents since 1982. Watson's father passed away in 2010. His mother Molly still lives here.
Links: en.wikipedia.org
1,718 views