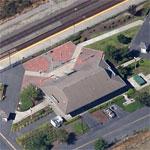 The original Union Pacific station at East Olympia was demolished in the late 1960s. It was used by the pool trains that ran between Seattle and Portland by all 3 railroads that used the line, Northern Pacific, Great Northern, and Union Pacific. Amtrak trains during the 1970s and 1980s used a wooden shelter as East Olympia's passenger train station, however the station site was remote and had no public transport, no lighting and a pot-holed gravel parking lot with a public telephone that rarely worked.

The new Centennial Station was built by the non-profit Amtrak Depot Committee and opened in early 1994 following a 6-year fundraising and lobbying effort by citizens of Thurston County. It is believed to be the only Amtrak station in the nation operated entirely by volunteers.
Links: en.wikipedia.org
536 views