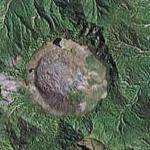 The volcano, which is about about 750 miles (about 1,210 kilometers) south of the Chilean capital, Santiago, began erupting early Friday, raining gray ash onto Chaiten. The small city is on the Corcovado Gulf, in southern Chile.

The volcano last erupted around 7,420 B.C., according to the Smithsonian's Global Volcanism Project.
Links: www.cnn.com
2,942 views