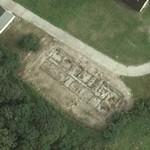 Chełmno extermination camp (German name Kulmhof) was an extermination camp of Nazi Germany that was situated 70 kilometres (43 mi) from Łódź, near a small village called Chełmno nad Nerem (Kulmhof an der Nehr, in German). This was in a part of Poland annexed by Germany as Reichsgau Wartheland in 1939. It was the first extermination camp, opened in 1941 to kill the Jews of the Łódź Ghetto and the Warthegau.


At least 153,000 people were killed in the camp, mainly Poles, Jews from the Łódź Ghetto and the surrounding area, along with Gypsies from Greater Poland and some Hungarian Jews, Czechs, and Soviet prisoners of war.
Links: en.wikipedia.org
1,218 views