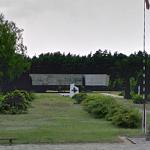 By Mike1989 @ 2013-12-25 15:45:14
@ 52.154599, 18.725573
Chelmno, Poland (PL)
Chełmno extermination camp, known by the Germans as the Kulmhof concentration camp, was a Nazi German extermination camp situated 50 kilometres (31 mi) from Łódź, near a small Polish village called Chełmno nad Nerem (Kulmhof an der Nehr in German). After Germany invaded Poland in 1939, it annexed the area as part of the territory of Reichsgau Wartheland. The camp operated in two periods, from December 8, 1941 to March 1943 during Aktion Reinhard (the most deadly phase of the Holocaust), and from June 1944 to January 18, 1945 during the Soviet counter-offensive. It was specifically built to exterminate most of the Polish Jews of the Łódź Ghetto and the local Polish inhabitants of Reichsgau Wartheland (Warthegau). In between these two periods, modifications were made to the camp's killing methods, as the main part of the camp was dismantled in 1943.
Links: en.wikipedia.org
526 views