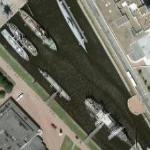 By kjfitz @ 2006-12-19 13:25:21
@ 53.540537, 8.578016
Bremerhaven, Germany (DE)
The Deutsches Schiffahrtsmuseum (German Maritime Museum) is a museum in Bremerhaven, Germany. It is part of the Leibniz-Gemeinschaft. The main museum building was opened on September 5, 1975 by then-president Walter Scheel, though scientific work already had started in 1971. In 2000, celebrating the 25th anniversary of the museum, the Hansekogge, a ship constructed around 1380 that was found in the Weser river in the 1960s, was presented to the public after undergoing a lengthy process of conservation in a large preservative-filled basin.

The museum consists of the building planned by Hans Scharoun as well as several museum ships in the Old Harbour of Bremerhaven, including the Seute Deern windjammer and the Wilhelm Bauer U-boat.
Links: en.wikipedia.org
1,139 views