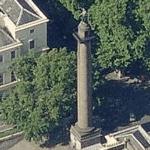 By adrbr @ 2008-03-07 21:30:44
@ 51.506374, -0.132018
London, United Kingdom (GB)
The Duke of York Column is a monument in London, England, to Prince Frederick, Duke of York, the second eldest son of King George III. It is located near where Regent Street meets The Mall, in between the two terraces of Carlton House Terrace - the steps down to the Mall are known as the Duke of York Steps, and halfway down them are the Cabinet War Rooms. The column was chiseled from pink granite, and the statue created by Sir Richard Westmacott in 1834. The statue is facing northwest, towards the Crimean War Memorial and Piccadilly Circus.

Prince Frederick, Duke of York was the commander-in-chief of the British Army during the French Revolutionary Wars. The Duke is remembered in the children's nursery rhyme, "The Grand Old Duke of York". When he died in 1827, the entire British Army had to forego one day's wages in order to pay for a monument to the Duke. The column was started in 1833 and finished one year later.

The great height of the column (123 ft 6 in or 37.6 m) caused wits to suggest that the Duke was trying to escape his creditors, as the Duke died £2 million in debt.
Links: www.victorianlondon.org
811 views