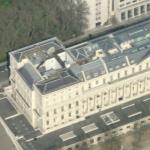 Together they own The Mansion at Carlton House. In 2006, when the Crown Estate listed it for sale, the Hinduja brothers went all-in, beating out bids from Russian and Middle Eastern billionaires, closing the deal for $95 million for a 125-year lease. Over the next five years the brothers spent another $95 million restoring the mansion.

It is estimated that the renovated property is worth over $500M.
Links: www.forbes.com
1,143 views