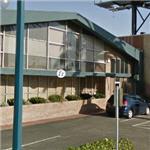 Details of his prediction included:
- Earthquakes would occur as each time zone reached 6pm.

- About 3% of the world's population would be called to Heaven.