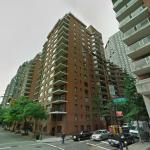 Her apartment appeared to be set right off the east river in the upper 70s or lower 80s in-between York Avenue and East End. In the episode entitled "Señorita," she lists her address as 627 East 54th Street.
Links: en.wikipedia.org
2,675 views