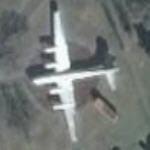 It differs from its older sister by having more powerful R-4360 engines, a taller tail fin and rudder and lighter but stronger wing structure and landing gear. B-50s served as strategic bombers during the 1950's, notably with the 93rd Bomb Wing at Castle Air Force Base in Atwater, California. After being replaced by B-36's and B-47's, they were relegated to other duties. Special versions were fitted as tankers, trainers, weather, and reconnaissance aircraft.

The B-50 is the first aircraft to fly non-stop around the world. B-50s from Carswell Air Force Base, Texas, flew west to east around the globe during the period of February 26th to March 2nd in 1949. They covered a distance of 23,452 miles in a time of 94 hours and one minute.

The aircraft on display at Castle Air Museum is a weather reconnaissance version of the B-50. It began life as a bomber, but in 1955, it was reconfigured to its present configuration. It was then assigned to a weather reconnaissance squadron at McClellan Air Force Base in Sacramento, California, where one of its missions was atmospheric sampling after Soviet atomic and hydrogen bomb tests.

These samples enabled the U.S. to determine the components that made up these Soviet weapons, and thus gained knowledge of how powerful the Soviets were. The display aircraft was retired in 1972 and flown to Davis-Monthan Air Force Base storage facility in Arizona. It was acquired by Castle Air Museum in 1980 and flown into Castle Air Force Base to join the Museum collection.
Links: www.elite.net
1,617 views