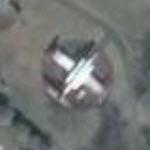 The Canuck first flew in January 1950 and a total of five versions, or Marks, were produced. The Canuck was affectionately known as "Clunk" for the noise the landing gear made as it retracted into its well after takeoff.

In the 1970s, CF-100s were assigned to an electronic warfare role. The RCAF's 414 Squadron would fly missions in them to simulate enemy attacks, thus testing friendly air defenses.

The aircraft on display at Castle Air Museum is a Mark 5 version which last served with the 414 Squadron. It flew into Castle Air Force Base as a gift to the Museum from the Canadian government in January of 1982 and was gratefully accepted by the Museum. Its presence here marks the friendship between our country and its northern neighbor and ally.
Links: www.elite.net
785 views