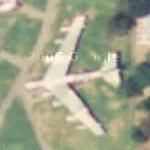 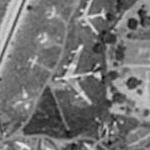 The B-52 was and is not strictly a nuclear bomber. It is quite effective as a conventional bomber as well. B-52s served in the skies over Vietnam, flying from bases in Thailand and Guam.

The B-52 participated several important bombing campaigns that took place during the Vietnam Conflict. They were code named Rolling Thunder, Arc Light, Linebacker 1, and Linebacker II. During these campaigns B-52s bombed strategic and tactical targets in both South and North Vietnam. B-52s again saw combat in Iraq in Operation Desert Storm in 1991. The last production model, the B-52H, has recently been used in Afghanistan. It has more powerful engines and has been modernized in many other respects.

The B-52s of Castle Air Force Base were involved in Desert Storm and flew bombing missions against the Republican Guard using the carpet bombing technique. Their contribution helped bring the conflict to a quick conclusion.

The aircraft on display at Castle Air Museum is a "D" model of the Stratofortress which served on active duty from 1957 until 1982. It served with the Strategic Air Command for its entire career and saw combat in the skies over Vietnam. For a time, it was stationed at U-Tapao Air Base in Thailand and at Anderson Air Force Base, Guam. It last served with the 93rd Bomb Wing at Castle Air Force Base, Atwater, California. Located under the wing of the aircraft on display is one AGM-28 Hound Dog missile.
Links: www.elite.net
759 views