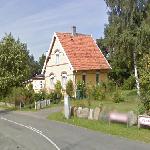 Most of the station buildings on Bornholm are now preserved.