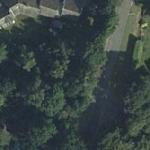 What's left today:
The footpath down to the halt and some timber from the road side gate survive. The trackbed is badly overgrown and nothing remains of the timber platform. Brickwork from the partially demolished and buried road bridge is also visible.
Links: www.disused-stations.org.uk
362 views