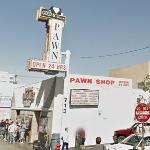 By kkeps @ 2010-06-01 12:28:58
@ 36.161481, -115.145645
Las Vegas, Nevada (NV), US
Pawn Stars is an American reality television series appearing on the American cable TV network the History Channel. Produced in Manhattan by Leftfield Pictures, the series is filmed in Las Vegas, Nevada, where it chronicles the daily activities at the Gold & Silver Pawn Shop, a 24-hour family business operated by patriarch Richard Harrison, his son Rick Harrison, who opened the shop with his father in 1988, and Rick's son Corey, who has worked there since childhood, and who is being groomed to one day take over the shop.
Links: en.wikipedia.org
13,890 views