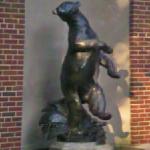 Created by renowned animal sculptor and Brooklyn native Frederick George Richard Roth, the lighthearted pieces are among several Roth works acquired by Central Park in the 1920s and 1930s. (Among them is Balto, the statue of the legendary Alaskan husky).

The Central Park Conservancy refurbished the sculptures in 1993, and today Roth’s pieces continue to delight Park and zoo visitors of all ages.
Links: www.centralparknyc.org
627 views