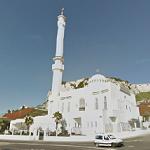 By Mike1989 @ 2012-12-16 03:36:21
@ 36.111565, -5.345224
Gibraltar, Gibraltar (GI)
The Ibrahim-al-Ibrahim Mosque, also known as the King Fahd bin Abdulaziz al-Saud Mosque or the Mosque of the Custodian of the Two Holy Mosques, is a mosque located at Europa Point in the British overseas territory of Gibraltar, a peninsula connected to southern Spain. The mosque faces south towards the Strait of Gibraltar and the African country of Morocco just a few kilometres away.
Links: en.wikipedia.org
534 views