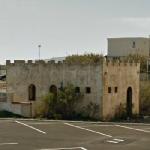 By Mike1989 @ 2012-12-16 04:23:57
@ 36.111761, -5.345298
Gibraltar, Gibraltar (GI)
Nun's Well is an ancient underground water reservoir in the British Overseas Territory of Gibraltar. It is located at Europa Point, and is thought to be of the Moorish period. It represents some of the earliest evidence of an artificial water supply in Gibraltar. The name of the cistern is thought to be derived from the nuns associated with the Shrine of Our Lady of Europe. In the eighteenth century, Nun's Well supplied the military with water. In the early nineteenth century, it provided water for the brewery that was built next door. In 1988, the Royal Engineers constructed what is now the main building, which has a castle-like appearance. Nun's Well became the focus of controversy during the 2010-2011 restoration of the site.
Links: en.wikipedia.org
524 views