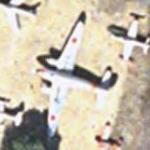 By kjfitz @ 2007-06-10 20:20:48
@ 35.839075, 139.39483
Iruma, Japan (JP)
The Curtiss-Wright C-46 Commando was a American transport aircraft originally designed for commercial use although it was primarily used by the United States Army Air Forces during World War II. Also known to the men who flew them as "The Whale," the C-46 served a similar role as its counterpart, the Douglas C-47 Skytrain, but was not quite as famous or as extensively produced. The Navy/Marine Corps version was known as the R5C. Postwar civilian use as a rugged cargo aircraft in northern and remote locations has extended its service life into the 21st Century. [wikipedia]
593 views